Txetxu Ausín is a tenured scientist at the Institute of Philosophy (Spanish National Research Council) at the Unit of Applied Ethics in Madrid. He is also an Invited Professor in Bioethics and Contemporary Ethics at the Instituto Tecnológico de Estudios Superiores de Monterrey, ITESM, México. He is involved in the Spanish Leibniz Society and the Spanish Association for Ethics and Politics as well as he is manager of the web and journal about Applied Ethics DILEMATA (www.dilemata.net). His main research areas are Ethics and Government, Human Rights and Global Justice and Economy on a Human Scale: Social Responsibility, Sustainability, and Development.

Mar Cabezas is a Postdoc researcher at the Centre for Ethics and Poverty Research (CEPR) of the University of Salzburg, where she works in the project “Social Justice and Child Poverty”. She earned her PhD in Philosophy from the University of Salamanca (2012) specializing in the role of emotions in moral reasoning. She has a M.A. in Human Rights and is an Expert in Psychological Effects of Child Mistreatment (UNED, 2011).

Rosario Carmona is lecturer on Public International Law and International Relations at the University Pablo de Olavide (Seville), awarded the Human Rights Essay Award (Washington College of Law) in 2011 for her work on the rights of children. She also collaborates with the Université Catholique de Lyon (France) and UNICEF. Her main research focus is children´s rights, child migration and child abuse.

Bill Gardner is a senior scientist in the area of pediatric mental health services research, outcomes measurement, quality measurement, ethics, and health policy at the Children’s Hospital of Eastern Ontario (Ottawa, ON). Dr. Gardner trained as a child psychologist and statistician. He was previously professor of pediatrics at Dalhousie University and the Ohio State University. He has published extensively in the field of pediatric health services research. His research is focused on improving mental health care for children.

Gunter Graf is Postdoc researcher at the Centre for Ethics and Poverty Research (CEPR) of the University of Salzburg, where he works in the project “Social Justice and Child Poverty”. He is also research fellow at the international research centre for social and ethical questions (IFZ) in Salzburg. He mainly works in political and social philosophy, with a focus on the capability approach and its relation to poverty and children.
Carlos Pitillas is a psychologist from the University of Comillas (Madrid), also trained in the Infant-Parent Institute (Illinois). He has worked with children diagnosed with cancer from 2006-201, he has also collaborated with several projects such as Children Play Therapy Instrument (CPTI; New York) and, and Circle of Security (Washington.) Since 2012 he works with families at risk of social exclusion in Madrid.

Gottfried Schweiger works at the Centre for Ethics and Poverty Research, University of Salzburg, where he is currently the Principal Investigator of the research project "Social Justice and Child Poverty" (funded by the Austrian Science Fund (FWF): P 26480-G15). Schweiger is a trained philosopher and his interests lie in social and political philosophy, and the philosophy of sports.
Rosana Triviño currently teaching bioethics and legal philosophy at the University of A Coruña, is a PhD. in Moral Philosophy (University of Salamanca) also graduated in Humanities (Carlos III University of Madrid) and Physiotherapy (University of Comillas), and M. A.  in Political Science and Constitutional Law (UNED), receiving the prize for the best research in the 2008/2009 edition for her work on patient autonomy and refuse treatment on religious grounds concerning the STC 154/2002. She was a researcher JAE-Predoctoral at the Institute of Philosophy of the CSIC and has been a visiting researcher at Oxford (Uehiro Center for Applied Ethics), Cleveland (Case Western Reserve University), Princeton (Princeton University) and New York (Hastings Center).
Sridhar Venkatapuram is a lecturer in global health and philosophy, and Director of the MSc in Global Health & Social Justice. Sridhar’s research and expertise is in global/public health, human rights, ethics and philosophy. He aims to bridge normative reasoning, particularly about social justice, with relevant natural and social sciences related to human health. He has academic training in a range of disciplines including international relations (Brown), public health (Harvard), sociology (Cambridge) and political philosophy (Cambridge). At Harvard, he worked with the late Arjun Sengupta, UN Independent Expert on the Right to Development, in conceptualizing its philosophical and ethical framework. He was the first researcher at Human Rights Watch to specifically focus on health as a human rights concern.

Sepideh Yousefzadeh is Post-doc Researcher at the University of Groningen. Her current research interests focus on “Normative indicators of child growth” and her PhD thesis (from Maastricht Graduate School of Governance) dealt with multidimensional child poverty in Iran. Prior to her experience as a researcher, she has been working with several international organisations and NGOs in Iran and Afghanistan. Her previous academic training has been in public administration at Harvard University. 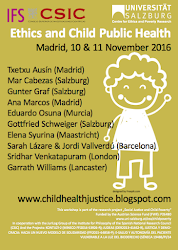